This Valentine’s Day, we celebrate the tales of romances that grew among alumni in classrooms, lunch tables and hallways. Corpus isn’t just a place where alumni have studied and graduated. For special couples, like Irene and Neil, Corpus is where they fell in love.

The first words Irene said to her future husband, Neil, after seeing him playing the bagpipes were, “I really hate the bagpipes.” 21 years later, Irene reflects that the bagpipes eventually grew on her. The two met in their first year at Corpus Christi College in the early 2000s, one of the first classes at Corpus, and began their connection with a friendship. Shortly after starting dating in second year, they knew this relationship would go the distance. “After a month, we both knew that we were each other’s people.”

During their time at Corpus, they enjoyed the close-knit community and the opportunities for activities outside the classroom, such as trips to Pemberton and Keats Island. “There were a lot of great experiences at Corpus. The teachers were phenomenal,” said Irene. “We always used to say, I’m a name, not a number.” (A phrase that is still used by today’s Corpus students!)

Fast forward and the two were married by Fr. James Hanrahan, CSB, one of their phenomenal teachers at the College. Irene remarked on the specialness of having Fr. Hanrahan officiate, “He taught us and he saw our love blossom.”

The bagpipes that sparked their first conversation continued to have a role in their lives with Neil receiving a bagpiping scholarship to Monmouth College in the US. Irene transferred to Simon Fraser University after Corpus and both Irene and Neil graduated from business programs.

Irene values Neil’s quick wit and his ongoing care for others. “He has a wicked sense of humour. He’s funny…He’s really quick on his feet. He is the most generous person you will ever meet. He’s got a big heart.” Neil similarly admires the way Irene puts others before herself and how generous she is with her time, focusing on the benefits of others.

After over two decades together, and two children together, their relationship continues to grow and blossom. “Every day we fall more in love with each other,” says Irene. 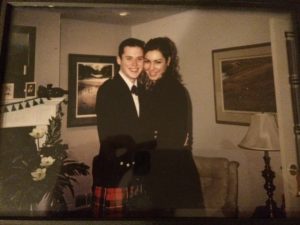 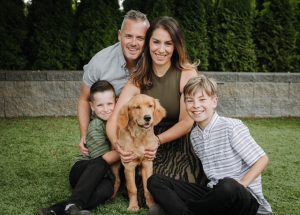 A big thanks to Irene and Neil for sharing their story with us!
Did you find love at Corpus? Our Alumni Office would love to hear from you. Connect with Jay Cruz, Alumni Relations Officer.